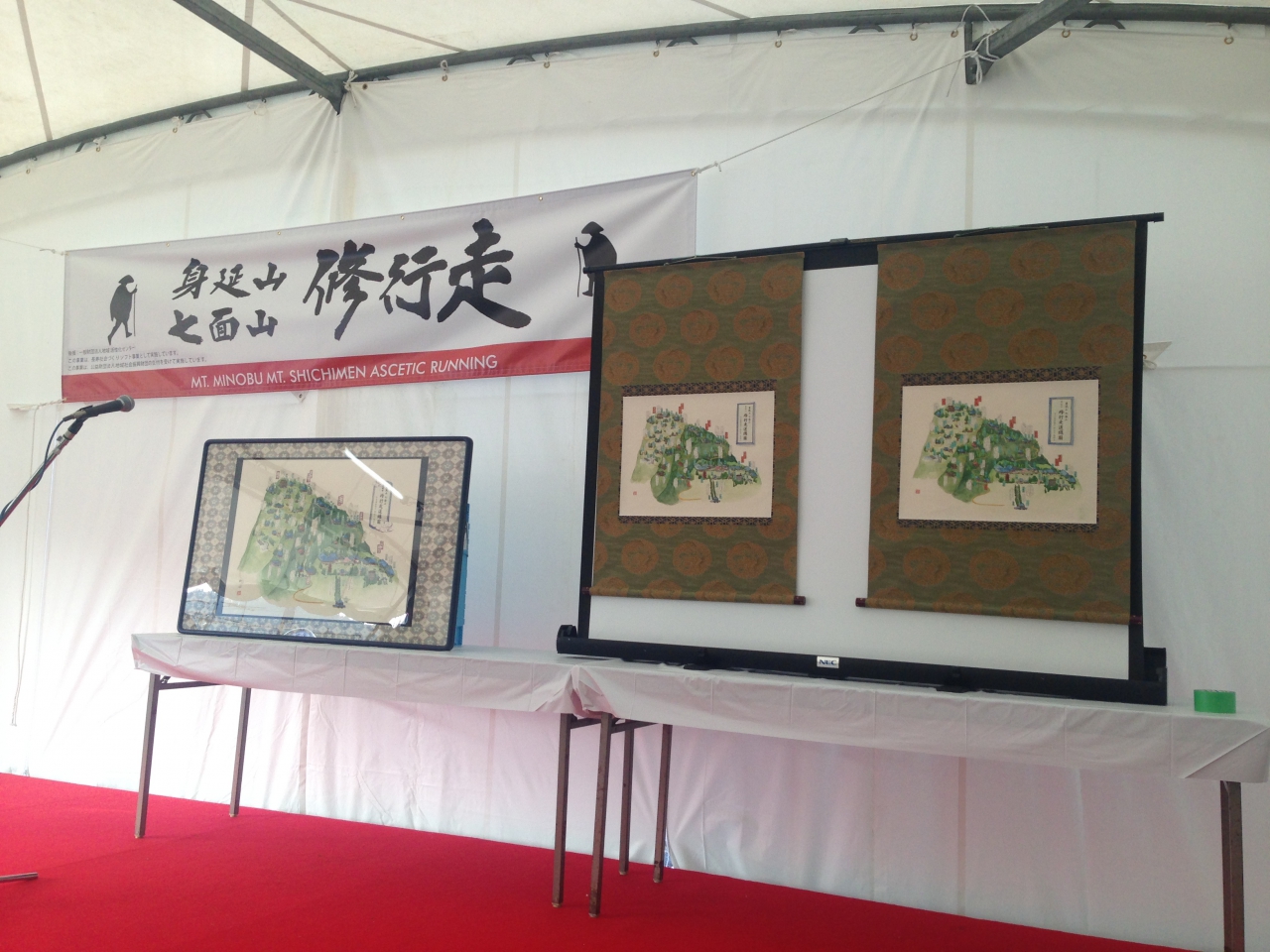 The annual event of Shugyoso (Monk’s Run), held in November, is a trail running race passing through Mount Minobu, where the head temple of Nichiren sect is located, and Mount Shichimen on which the guardian deity of Lotus Sutra lives.

“Shugyoso Doso-zu” was created as prizes for the winners of the ‘Shugyoso’ Long Course race called “Shichimen Shoryu (dragon climbing up Mount Shichimen) course, which is the longest (36km) and hardest running course among other Shugyoso courses because the variation in altitude is 1,200 meters. This time, I set up the drawing as a hanging scroll.

The course of this trail running is the approach, on which the followers of the Lotus Sutra walk while chanting the mantra ‘Hoke-kyo’ (Nichiren chants for self-awareness). The maps, showing this approach between Mount Minobu and Mount Shichimen have been preserved since long ago. When I started looking at them, from the older ones to the more recent ones, I found that some constructions were destroyed by fire, and others were rebuilt, so I couldn’t stop noticing how time has made changes around the approach.

I started drawing with a wish that participants of the race, who actually run through the course instead of walking, could walk on the path in a more relaxed manner once again, after the run was over, following the footsteps of the Hoke-kyo followers.

Referring to the old maps drawn long ago, with the permission of Minobu University Library, aerial photographs, photographs taken by actually walking through the path, and images uploaded on the internet, I drew the constructions as faithfully as possible reflecting the number of pillars, the real shapes of the roof that cannot be seen from the front, etc…

The Shugyoso Executive Committee has placed an order for a “unique” hanging scroll, not quite like a typical one with the road map. So I added my own comments on markup balloons, like I actually walked the trail and what I actually felt and noticed. These markup balloons had never been used before on the historical hanging scrolls.

I had created two pieces of hanging scrolls, one each for both male and female winners, to be presented to

those who ran through the course at a phenomenal pace.