Fuji was selected because historically, the temple has a close tie with Saitō Dōsan, a Japanese Samurai during Sengoku period. Hence the priest wanted to use the character “tō” from his name, which is also “Fuji” in Japanese, meaning wisteria. Sakura was selected after the famous weeping cherry blossom trees that grow at the main temple of the Nichiren sect.

There is a mortuary chapel further back, past the ceiling art of Sakura, and yet further behind, past the wisteria painting, is a lounge. I made a break in the ceiling pattern as though it has been cut out slenderly, and filled the space with a painting – which I thought would lead the worshippers to the furthest point at the back.

I have installed these paintings by a special fixing method from the back so that the thin crosspieces of the ceiling did not disturb the painting on the thin boards. 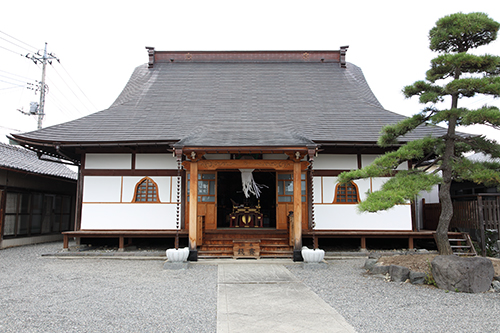