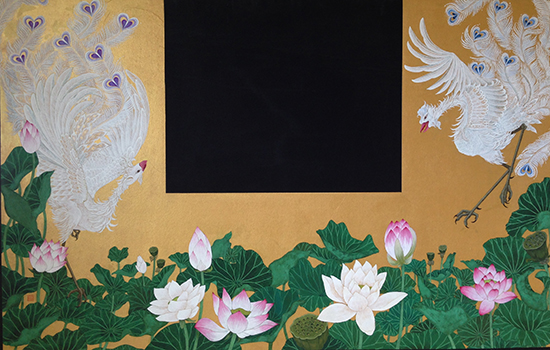 Byobu (folding screen) is a distinctive furniture style of the Japanese culture. It plays an important role of separating a space with its large screen, and at the same time, it ensures bringing natural scenery effectively into the room.
You can give various colors to the room by choosing differently designed Byobu in accordance with the seasons and functions. Yes, Byobu can be understood as a “folding art/drawing”.

At first, I drew this as a colored preliminary sketch for the ceiling art of a certain temple, but later I thought that just

installing it on the ceiling in a framing style would not be interesting enough, and anyway it was too large…So I decided to set it up as a two-panel screen.

I portrayed the moment when a pair of Hoo-oo (phoenix) are just taking flight from the lotus flowers with great fellow feeling for each other.