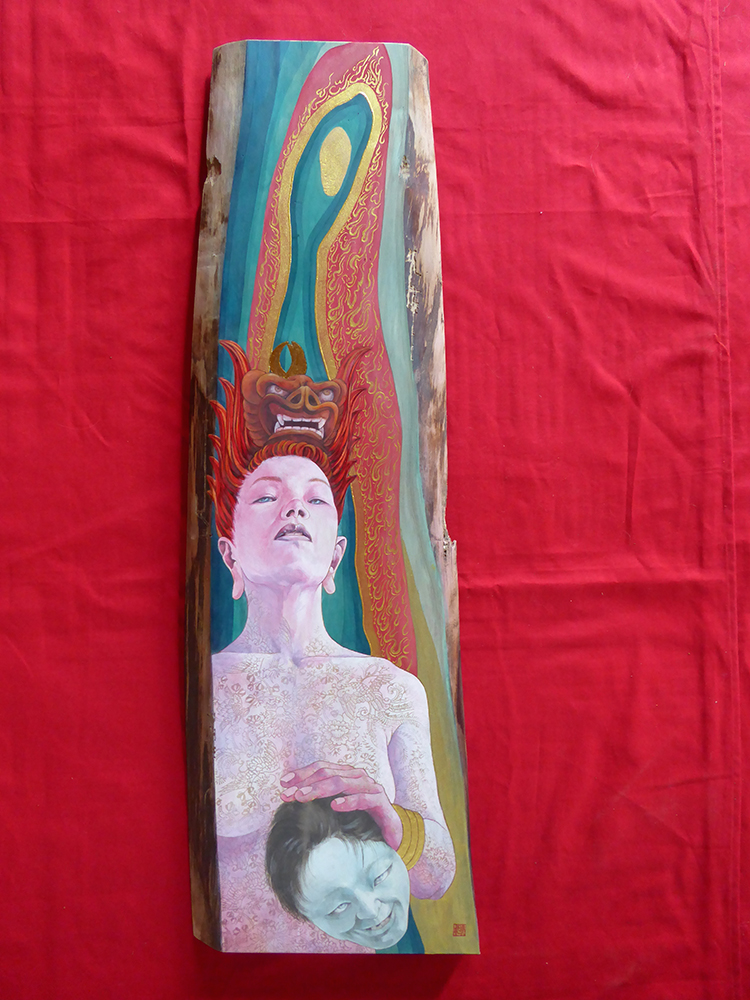 It’s no exaggeration to say that I drew this one for myself, I, who had been writhing in agony for a long time. I feel that I had finally liberated my feelings from suffering by drawing this.

Also, I wanted to provide to people who are hurting or suffering from various pains like me, the least opportunity to lend their ears to Buddha’s words. I made up my mind to interpret the legacy of the words of Buddha and express them in this picture – ‘Makumozo’, and other artwork that I have done after this. Hence, Makumozo, for me, is an extremely important piece.

A crown with the head of a lion, placed on the head with red hair standing erect is reminiscent of Aizen Myō-ō (Ragaraja in Sanskrit).  This Aizen Myō-ō has a venerable status of Mikkyo (esoteric Buddhism) and is said to lead people’s sexual desire, as it is, to enlightenment.

The face that I drew of Aizen Myō-ō, is modeled on a close resemblance of my own.

Furthermore, the face of the severed head, floating in mid-air and my hand placed on it, is also modeled after me.

In those days I felt like doing nothing, as I kept thinking again and again of what had already happened in the past. Those days when something black had settled in the pit of my stomach and when I was dominated by feelings of hatred. And, those days when I kept protecting myself with feelings of resentment at someone/something out of self-pity.

Being such a person who was trapped into the past woes and who couldn’t live the present moment, I was pierced deeply by the word “Makumozo”.

Similarly, having read a verse from the teachings of Buddha, called “Ichiya Kenjya no Ge (Hymn of Ichiya Kenjya)”, I had started wondering, and wondered for months, as to which direction I, myself, should be heading towards.

I drew myself with an expressionless face to convey that there is no need to do anything for those conflicting feelings, as those feelings themselves have, in fact, no meaning. And I have allowed myself to take my own severed head that is soaked in feelings of hatred, thus quelling discontentment.

This does not mean that memories are lost, and sorrows vanish.

Embracing a feeling of resentment does not mean that the unpleasant facts had not taken place in the past.

But forgetting such facts of the past doesn’t mean ignoring “myself”. Me, who had lived the moment at that time.

What I could do is to retain the facts as they had happened, just as they were.

To remember all that, I drew this “Makumozo”.